Way back in 2009, I decided to buy myself an amusing vanity URL. After much careful thought, I ended up choosing mycrot.ch (I won’t lie, because I thought it was funny as hell), which I have been using for my personal site / blog until the end of last week. But I’ve now decided to retire it. Why? Read on…

Those of you who follow me on twitter may have seen part of a minor argument I had with some folks on Friday night. Here’s a link to as much of the thread as twitter will show me in one place (I’ll paste screenshots of tweets excluded from this below as needed) https://twitter.com/jonlives/status/272037883421020160

Now, for context as to what I was complaining about, have a look at the hall of fame at the bottom of this page.

The gist of the argument is that I think it’s totally unacceptable for Comic Relief to be suggesting it might be funny to place your underpants on the desk of your receptionist and tell her that you’re going commando – in my (non lawyer) opinion, this sort of thing is pretty clearly sexual harassment  As you can see from the above twitter thread, several people (including @choosenick and @stef who worked on the project) didn’t see my complaint as anything other than being overly sensitive. So I replied with the following:

The aforementioned @choosenick then called me out with the following:

From subsequent comments on twitter I’m fairly sure he meant the above comment to be flippant, but it got me thinking. He’s actually got a perfectly valid point. Sure, my domain name is personal and not specifically directed at women, but is it really *that* different to what I’m complaining about? A good friend of mine observed that mycrot.ch was what he called “undirected sexual humour”, the problem arising with the typical direction in which such humour is normally directed – ie towards women. I have no actual evidence that my domain name ever offended anyone, but it’s still symptomatic of the sort of “bro” humour that pervades tech these days.

My employer, Etsy, have recently been doing an excellent job of encouraging more women to apply for tech roles, and it’s got me thinking a lot more about the issue recently. I generally fall into the apathetic bracket when it comes to issues and doing anything about them, but this time it struck me I could actually do something to demonstrate where I stand.

So, I shut down mycrot.ch and tweeted the following.

The following are the direct @replies I received in response to that tweet, all from people involved in the Comic Relief project: 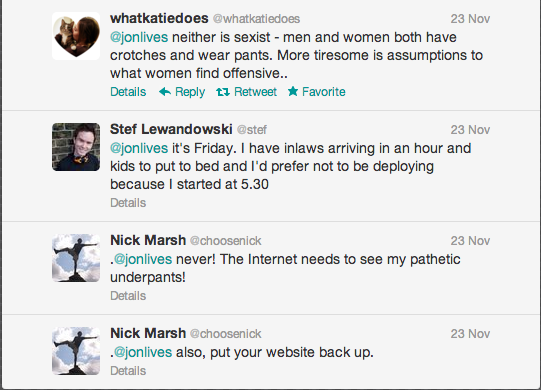 It may be that I’m over-reacting, or making tiresome assumptions about what women find offensive, but my honest opinion is that by perpetuating (even non-directed) sexual humour, I’m also helping to perpetuate the idea that it is normal and accepted within the Tech Community at large.

I’ve now migrated my personal site and blog to the jonliv.es domain you’re reading this on now. My personal website is also directly linked to my reputation, both professional and personal, and I’m making a stand that I don’t want either to say “Hey, this guy’s a bro just like us”. I feel strongly that we as a tech community need to take steps to reverse the “testosterone and booth-babes” culture which has become ingrained in our industry. It may even be the case that until the scales are balanced again, we have to become more sensitive about our humour etc than we’d perhaps like to be the case.

Maybe one day, when any woman who wants to work in tech can be sure of being treated as fairly as her male counterparts, and isn’t deterred from working in tech for any reason other than genuinely not being interested, I’ll reclaim mycrot.ch. But for now, jonliv.es.

Incidentally, Comic Relief still have that video online, so please do give them your feedback if you feel the same way as I do.